Drive West out of Wadena, Minnesota on State Highway 29 into Compton Township. Turn left onto County Road 77 at the edge of section 10. Take another left about a quarter mile in onto a two rut lane of sand and gravel across from an Amish farm. Drive through the horse dung, set the car in park, and look left.

The older folks in my family call it the Prairie Cemetery. It’s prairie all right. Grass is plentiful and so are fields of corn one year, soybeans probably the next. A large grove of fir trees to the North and a bit to the East break the winds. A small wood sign marks the place.

It was raining the day we stopped by four years ago on a bit of whim. The clouds hung low in the sky which is typical weather for this northern inland place. August is preparation for winter after all.

Rain spat on the car windows before finding a steady rhythm as I drove south on U.S. Highway 71. We had just come off the lake near Bemidji and had a long day of driving before us. My husband had the worst case of “lake itch” I had ever seen. One of the boys had it too and the other one was just knee deep into his fourteenth year which meant he ate all the time and when he wasn’t eating he was complaining or suffering from glossy-eyed screen syndrome.

But we were so close to this place which had haunted me for seventeen years that I tensed and ached and just had to plow through the push back to stop by for a visit, my second visit. Thankfully my mother was game for the adventure.

My first visit out to the Prairie Cemetery had been late September of 1994. I was up for Great Aunt Mabel’s last picnic and had not been in these parts for years, maybe even a decade. Dad was in a rambling mood that weekend and we rambled all over the county eventually ending up at this ghost of a cemetery.

The place immediately confused and intrigued me. The Prairie Cemetery was not “the” cemetery—the one a few miles away down in section twenty near the farm where Dad grew up and in which it seemed I was somehow related to every tombstone at least once if not twice. Now I was learning the Prairie Cemetery (called that because really who now can pronounce ““Gustfva” with any air of authority even if descended from Swedes) was somehow connected to us as well at least according to Dad. The connection for me though was as buried as the graves.

The cemetery reeked of age. The stones were primitive and the writing worn. Thin small stones dotted the green tipping slightly to one side or the other, not like the heavy markers we now plant in such places. The ground was swallowing some of the oldest stones bit by bit as if they were no longer necessary or made better use of as organic material for a graveyard compost.

Maybe there had been an order to the place back in its day but now the stones seemed scattered and mostly forgotten. I wondered if some graves were now unmarked given the large spaces between groups of stones or the occasional solitary one. Obviously the place was old, the dates on the stones confirming this.

Now dodging raindrops and snapping pictures—something I had not thought to do on my first visit—I was struck by how my memory twisted many of my first impressions. These impressions had been visceral like an ancient connection to previously unknown kin warping my sense of reality. I now saw the monument was not a grave. The white pillar was not a monument. The names where not just strangers.

On this second visit I had a purpose. I sought tangibles: facts, truth if possible, and maybe even some wisdom.  I clicked photos of each piece of interest and scribbled notes feeling like anthropologist discovering an ancient people.

Four years later I have put facts to some of these notes, family legends to others. Some notes I continue to puzzle out as questions create more questions along with frustrations. I am certain of one thing though–this place waits to tell its stories.

It’s an old ugly rocker sitting low to the ground for people with short legs. The head board sports some fancy filigree reminding me of old cowboy movies. It’s brown and easily shrugged off as useless. Most people would think of it as storage room material or perhaps kindling for a summer bonfire.

We think the thing came from the John Ohman farm in Compton Township of Otter Tail County, Minnesota. John Ohman, formally known in Sweden as Johan Johannson, emigrated in 1882 to Carver County, Minnesota and moved to the farm by 1883. My guess (and this is just a guess) is that the rocker was acquired up there in Compton to rock my grandfather, Carl Johan, when he was a baby. Grandpa Carl was the last child of nine to be born to Johan and Johanna Johannson and the only child to be born in Amerika. Carl was born August 10, 1883.

On this 1912 plat map of the area (courtesy of the Minnesota Historical Society) the farm of eighty acres is in the Southeast corner of section 20.

Grandma Emma Johnson’s family farmed just south of the Ohman farm. The story goes Emma came home from teaching in the Iron Range to nurse her dying mother. Carl was now farming the land and Emma ended up marrying him and moving across the road to the Ohman farm in March of 1920.

According to my Dad, Grandma liked to repaint the Ohman kitchen now and again.  I guess after a cold Minnesota winter cooped up in about 600 square feet with little children, in-laws, and farm hands about, everything got painted as a form of emotional survival.

Layer upon layer of paint came off other items from the farm. The rocker had just as many layers. Except for some reason, the paint just didn’t want to let loose. Dad tried to strip it like he had the old kitchen table. But he gave up, overwhelmed by its stubbornness. Instead he painted the rocker a glossy and ugly brown.

I discovered the rocker when I was a teenager. Finding the thing “retro” and cooler than my parents, I moved it to my bedroom. It’s been with me on and off ever since.

Grandma Emma’s DNA must have been coursing through my veins this past winter. One day I looked at that rocker and the next day I was painting it with some sort of post-Christmas, January, winter fervor, writer’s agony.

Worn paint on the underside showed the rocker to be made of cheap pine. Cheap or not, my brush dripping in linen white chalk paint, unmasked curves and crevices and curly-cues previously hidden under the ugly brown paint. Waxes and sand paper scrapes added highlights and even more interest. 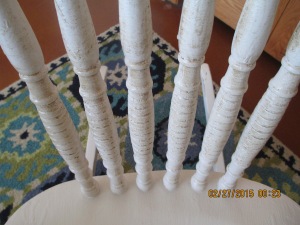 Images of the rocker’s life up north in that old cabin flashed in my mind’s eye. I saw women running their fingers across the carved wood and young children learning to rock themselves in it before their feet could touch the floor. I imagined Johanna darning socks and mending trousers as the kerosene lamp burned its wick down or nursing a fussy baby Carl at midnight. And I imagined Grandma Emma as a new bride possibly thinking the rocker as old and ugly even then.

I don’t know if I will ever view the old ugly rocker as beautiful. But it is wearing its new coat of paint well. And I, its keeper, am tossing possible repainting plans about for the next time I am struck with a DNA fit. I’m thinking this time of a Swedish peasant green in honor of all the peasants who came before me with furniture left about to be discovered. 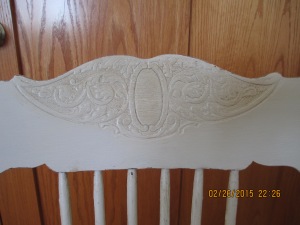 © Jennifer Ohman-Rodriguez and Jenniferohmanrodriguez.com, 2015, 2016, 2017, 2018, 2019 and 2020. Unauthorized use and/or duplication of this material without express and written permission from this site’s author and/or owner is strictly prohibited. Excerpts and links may be used, provided that full and clear credit is given to Jennifer Ohman-Rodriguez and Jenniferohmanrodriguez.com with appropriate and specific direction to the original content.